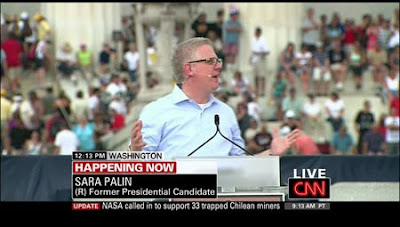 Check out the above screen grab. Glenn Beck is labeled as Sarah Palin and They don't even have Palin's name spelled correctly. Palin is also identified as a former Presidential candidate. She was actually John McCain's VP candidate. The liberals at CNN must have been really shaken by the fact Glenn Beck's rally drew as many as 300,000, while Al Sharpton could only scrap up around 3,000.
Posted by Bluegrass Pundit at 8:33:00 PM