Obama Claims He is Making Decisions "for the next generations,” 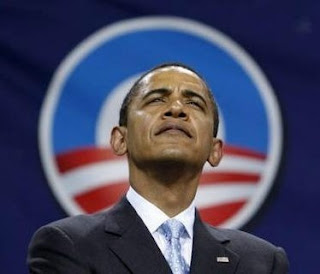 Brian Williams asked President Obama about the Glenn Beck rally. Not surprisingly, President Obama ignored the rally. Obama also took a swipe at polls revealing many people think he is a Muslim.

"I can't spend all my time with my birth certificate plastered on my forehead."

The surprising thing President Obama revealed was this comment.

This reveals much about Obama's thinking. He doesn't care what ordinary Americans or even the people who elected him think. He is a liberal elitist who sincerely believes he knows what is best for everyone else. President Obama views himself as a messiah-like figure. He will continue to do everything in his power to continue the hard left turn he has taken the country on. The damage he is doing to ordinary Americans and the Democratic Party in the short term is completely irrelevant to him.
Posted by Bluegrass Pundit at 7:31:00 PM

No big surprises there. His focus has always been on the big picture. Big agendas, big ideas. That's why he keeps tripping on the little overlooked details.

Less than two years ago pundits were asking if the Republican party will every recover. The President has almost single handedly put them back on the map. I can only hope they are up to the job this time...

"I can't spend all of my time with my birth certificate plastered to my forehead". Is something amiss in,"la la land". If he should do just that, its been said, "he might even grow up to be President, some day".

Why should you? Hawaii only asks $20 for registered copy of your birth certificate. So what are you hiding?