God Bless the first Muslim winner of the Miss USA contest. She wants to move the Mosque. 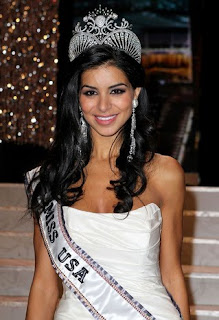 The first Muslim winner of the Miss USA contest, 24-year-old Rima Fakih, has taken the position President Obama should have. The Ground Zero Mosque developers have a right to build at that location, but the shouldn't.

The 24-year-old Rima Fakih, is the first Muslim winner of the Miss USA contest and is preparing for the Miss Universe Pageant, scheduled for Monday in Las Vegas.

“I totally agree with President Obama with the statement on Constitutional rights of freedom of religion,” Fakih told “Inside Edition” in an interview that will air tonight.

“I also agree that it shouldn’t be so close to the World Trade Center. We should be more concerned with the tragedy than religion.”

How long will it be before the name calling begins?
Posted by Bluegrass Pundit at 6:01:00 PM

We have the entire 26 minute video posted now on Common Cents. Please tell a friend.... this is an outstanding interview!!!