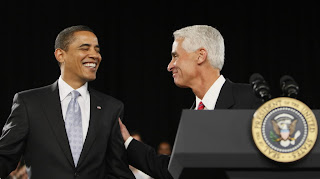 The spelling of flip-flop has been changed to Charlie-Crist.

Crist told a local TV station Friday that he would have voted in favor of President Obama's healthcare proposal were he in the Senate. That was a reversal of his previous position against the healthcare law.

"I would have voted for it," Crist said in the interview. "But I think it can be done better, I really do."

But now, Crist says he "misspoke" in that interview. His campaign sent out a statement Friday afternoon clarifying Crist's position on the healthcare law.

Someone must have informed Crist 56% of Florida voters oppose the heath care overhaul bill.
Posted by Bluegrass Pundit at 4:52:00 PM