Pro-Americans Give Leftists a Taste of Their Own Medicine 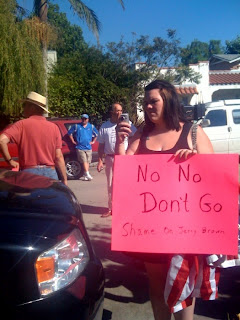 Morgan reports the pro-American protesters, “blocked the entrance of hundreds of wealthy Democrat liberals, including Sally Kellerman and Cindy Asner, ex-wife of Ed Asner.” Protesters laid down on the sidewalk outside the entrance gate where guests had to step over them.

Event host Jodie Evans was visibly angry at getting a taste of her own medicine and had several confrontations, including one in which she denied, against the evidence, that she supports the terrorist organization Hamas. Several guests were none-too-pleased with being protested, while some had no idea they were attending an event associated with Code Pink. Read more here.

Melanie is the founder of Move America Forward, not Code Pink.

"Melanie is the founder of Move America Forward, not Code Pink."

Sorry for the error. Thanks.