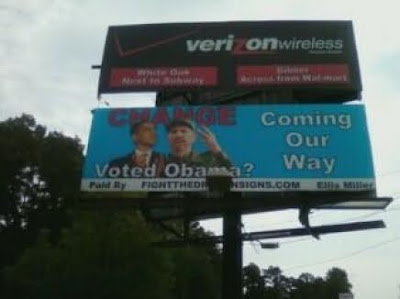 There is an anti-Obama billboard comparing President Obama to Fidel Castro in Gladewater, TX. The billboard has pictures of Obama and Castro with the word "Change" over their heads and "Vote Obama" under their portraits. Off to the right side the text reads "Coming Our Way". Someone poured gasoline at the base and started a fire. The billboard is at the top of a 30-foot-pipe and was undamaged.

GLADEWATER- Fire investigators are looking for the person who they say tried to set an Anti-Obama billboard on fire. KETK reports it happened Sunday morning on Highway 80 in Gladewater. Investigators say someone poured gasoline around the base of the 30-foot-pipe and lit it on fire. The flames, however, never touched the billboard itself.

The moonbat who tried to set this fire is so stupid, they thought they could burn a steel pipe. LOL.

..the same stupidity that led them to vote for Obama. Or maybe it's just cops who "act stupidly". Right Obama?