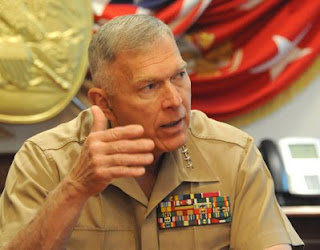 Marine General James Conway claims President Obama is giving our enemy 'sustenance' by setting a deadline for starting withdrawal. The Taliban believe they only have to hold out until that date.

Via Fox Nation: (Emphasis mine)

The top U.S. Marine general in Afghanistan said President Barack Obama’s announced July 2011 deadline to start withdrawing troops from the country had given “sustenance” to the Taliban.

“We know the president was talking to several audiences at the same time when he made his comments on July 2011,” Gen. James Conway told reporters on Tuesday. “In some ways, we think right now it’s probably giving our enemy sustenance….In fact, we’ve intercepted communications that say, ‘Hey, you know, we only have to hold out for so long.’”

Someone please tell me why Obama did the whole mini surge thing in Afghanistan? He doesn't seem committed to winning.