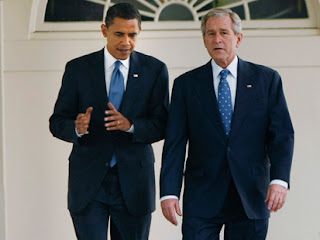 While support has nearly returned to previous levels elsewhere, support in Louisiana has, if it were possible, also increased, to 81%, with only 9% not in favor

President Bush's handling of Katrina could have been better, but he never deliberately did something to harm Louisiana like President Obama's drilling ban.

Unfortunately President Bush didn't have much cooperation from the local leaders before the storm hit, plus both the timeline of the storm and the levees breaking due to many years of not being repaired didn't help very much either. Plus, it wasn't really Katrina that actually caused the damage in Louisiana, the actual brunt of the storm took place in Mississippi, and it was levees that were the problem there.