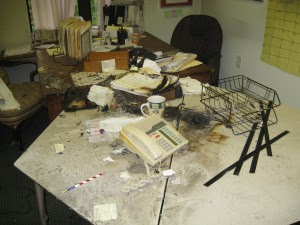 On August 17, at about 2:00 AM, Democratic Senator Russ Carnahan's office was firebombed; causing minor damage. A suspect was arrested and released. Other than a report here by St. Louis Today, there wasn't much in the way of national news coverage. It is very strange for the national media to ignore a story this juicy in an election year. We can never forget the feeding frenzy by the liberal media when Russ Carnahan's staff falsely claimed a coffin was left on his front lawn by Tea Party protesters. Why didn't the mainstream media track down the culprit and hang a Tea Party sign around his neck? The instant loss of interest by the liberal mainstream media can be attributed to one thing. The alleged criminal is one of their own. The man police arrested, suspect Chris Powers, was a Carnahan campaign worker with a beef about his pay.

He can be seen harassing Tea Party protesters in this 2009 video. He is the one who identifies himself as a Carnahan staffer.

According to Dana Loesch, he is also a left-wing blogger who identifies himself as a former journalist

He’s said to also blog anonymously at Talking Points Memo and described himself as a former journalist. Sources say that Powers has allegedly denied the charges and that the FBI were/are involved. I really hope, for Powers’ sake, that it really is as a listener suggested: just a case of a Carnahan staffer having a bong mishap.

The reaction would have been much different is it had been a Tea Party member or anyone on the right side of the political spectrum.