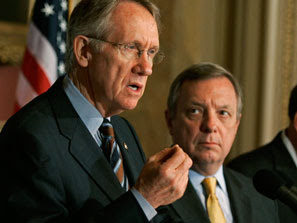 Senate Majority Whip Dick Durbin has taken a position of support for the Ground Zero Mosque. Durbin called out Newt Gingrich and Sarah Palin for dividing America with fear and betraying the Constitution. I guess he forgot his Senate Majority Leader Harry Reid is also opposed to the GZM. Of course, it is a little late to accuse Reid of betraying the Constitution. He already did that when he helped ram Obamacare down American's throats.

Senate Majority Whip Dick Durbin (Ill.) said Sunday that those who are opposed to the mosque are trying to divide the country with fear and hate.

“The mayor of New York City, Michael Bloomberg, has given his assent to this center and I support his decision,” Durbin said Sunday. “The politicians like Newt Gingrich and Sarah Palin who try to divide America with fear and hate over this issue betray the diversity which makes our nation great and the Constitution which they profess to honor.” Read more here.