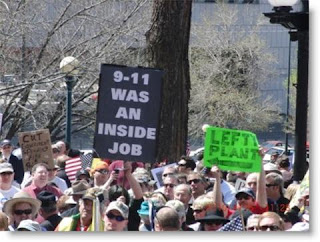 At first, the left tried to infiltrate the Tea Party with fake extremists, Now, many candidates nationwide are running under the Tea Party name, even though they have no known connection with the Tea Party. Tea Party members have accused Democrats of being behind these shenanigans in order to split the conservative vote this November. In Oakland County in southeast Michigan, Democrats have been busted and an employee is being thrown under the bus.

Democrats on the Oakland County Board of Commissioners Saturday called for the removal of a county Democratic Party employee in the wake of allegations of fraud by Oakland County Clerk Ruth Johnson a day earlier.

Commissioner Dave Coulter, D-Ferndale, said in an e-mail Saturday that Democratic commissioners approved the following statement:
“Democrats on the Board of Commissioners are very concerned about allegations that an employee of the county party may have had a role in fraudulent Tea Party candidate filings....

...Without commenting on the legal merits of these accusations, we ask for the immediate removal of Jason Bauer as an employee of the Oakland County Democratic Party. Read more here.