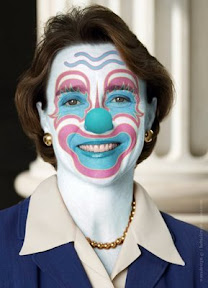 Don't let the door hit you in the butt on the way out of office. Blanche Lincoln's support for Obamacare, the stimulus and other liberal big government policies have turned voters against her. She has been stripped of her alleged 'blue dog' status and exposed as a big government liberal. Her GOP opponent is beating her in the latest Rasmussen poll by an incredible 38%.

Support for incumbent Democratic Senator Blanche Lincoln has now fallen to its lowest level yet as Republican John Boozman remains on track to shift Arkansas’ Senate seat to the GOP column.

The latest Rasmussen Reports telephone survey of Likely Voters in Arkansas shows Boozman capturing 65% of the vote, while Lincoln earns 27% support. Four percent (4%) like some other candidate in the race, and three percent (3%) are not sure.

There is no way she can recover from this large a gap by election day. Senator Blanche Lincoln is history.
Posted by Bluegrass Pundit at 6:15:00 PM