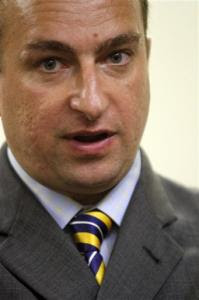 Sharif El-Gamal, the leading developer behind the Ground Zero mosque, has a sordid past. He has been arrested seven times, including assault and soliciting a prostitute.

Years before his latest real-estate project ignited an uproar, Sharif El-Gamal racked up at least seven run-ins with the law, including a bust for patronizing a prostitute...

...El-Gamal allegedly cursed at Vassiliev, called him the Arabic curse word "sharmouta" and punched him in the face, breaking his nose and cheekbones.

When he was arrested, El-Gamal denied he socked Vassiliev, but conceded, "[Vassiliev's] face could have run into my hand," court papers say.

Oh, and he is a tax cheat too.

Sharif El-Gamal, the leading organizer behind the mosque and community center near Ground Zero, owes $224,270.77 in back property tax on the site, city records show.

El-Gamal's company, 45 Park Place Partners, failed to pay its half-yearly bills in January and July, according to the city Finance Department.