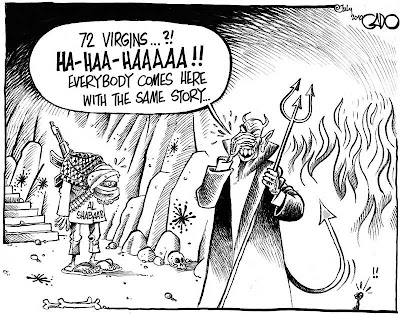 Ten Jihadis in Somalia suffer a workplace accident and blow themselves up.

An explosion overnight at a house used by insurgents in the Somali capital killed at least 10 al-Shabab militants, including seven foreign fighters, the Somali Information Ministry said Saturday.

The statement said the blast, in a southern Mogadishu neighborhood, may have been caused by a premature car bomb explosion. Three Pakistanis, two Indians, an Afghan and an Algerian were among the dead, the statement said. The government cited "security sources" as the basis for its information. Read more here.

The cartoon is great!