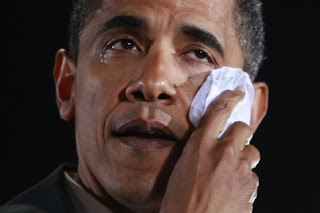 President Obama is in apology mode again. This time he is apologizing to the U.N. Human Rights Council. Obama told the council, "America's human rights record is less than perfect." The U.N. Human Rights Council was formed in 2006 and spends much of their time bashing Israel. It has 47 member countries who are elected by the U.N. Some of the notable human rights champions currently serving on the council are Libya, Cuba, Saudi Arabia and China.

The Obama administration has told the United Nations that America's human rights record is less than perfect...

In its first-ever report to the U.N. Human Rights Council on conditions in the United States, the State Department said some minorities are still victims of discrimination.

Former President Bush shunned the U.N. Human Rights Council for their mind-exploding hypocrisy and refused to issue a report.
Posted by Bluegrass Pundit at 5:50:00 AM

You know, i have about had it with these people. I suppose, however abhorrent i find the leftist "blame America first" sentiment, i think it ultimately serves a useful purpose: every time Obama or any other leftists does the apology crap it helps galvanize the regular American people against these out-of-touch bureaucrats who have no clue. Come on November!!!

Obama is the first un-American President.

The social disparities that exist in this nation are largely the part of poor parenting. Most parents in the socially impoverished areas of our nation do not properly raise their children, leaving the work to the school system and the streets. Is it any wonder that children turn to gangs seeking the sort of family they should be able to find at home? Not all parents are this way, but the large majority of them are. These problems are not the responsibility of any government, but of society itself. Parents need to be empowered to properly raise their children, illegal drugs need to be eliminated in this nation and gangs disbanded. Only then can we move forward as a society.

For Democrats to get on their high horse about this issue now is hypocritical! I agree with President Bush's reasons for not joining the human rights council, it's a hypocritical council with a serious set of double standards.

10-08-27 RE: Richard Fine - request for restoration of access to justice, and for corrective actions re: publicly and legally accountable validation of case management and online public access systems of the courts, jails, and prisons

Executive Summary
Los Angles, August 27 – request [1] was filed by Human Rights Alert (NGO) and Joseph Zernik, PhD, for restoration of access to justice in the case of the imprisoned, 70 year-old, former US prosecutor Richard Fine. The request was filed with Prof Laurence Tribe - Senior Counsel, US Department Of Justice, Access to Justice Initiative.

Less than two weeks later, on March 4, 2009, “Sentencing Proceeding” for contempt was conducted on Richard Fine at the Superior Court of California, County of Los Angeles, which was never validly recorded by the Court. Instead, the Court published false and deliberately misleading online records. The request claimed that the March 4, 2009 “Sentencing Proceeding” was only a pretense, which was never deemed a valid court proceeding by the Court itself.

On March 4, 2010, Richard Fine was arrested in open court by the Warrant Detail of Los Angeles County Sheriff’s Department – albeit with no warrant at all. Richard Fine has been held ever since in solitary confinement – albeit no judgment/conviction, or sentencing was ever entered in his case. Instead, the Sheriff’s Department insisted on holding him under false and deliberately misleading online inmate registration records, stating that he was arrested and booked on location and by authority of the non-existent “Municipal Court of San Pedro”.

This is the most outragously biased and un-educated discription of what the human rights council does. Please, put aside politics and learn what the UN and sub-category groups such as the HR council does.

In addition, the bush administration, if they joined this council, would be put under fire for human rights violations in guantanamo, the middle eastern wars, and so called "inhanced interrogation techniques." This is why they refused to be a part of the council, not because of Isreali biases. Grow up.

If you do not approve this to be posted, it just shows how uncontrollably biased the republican party has become.