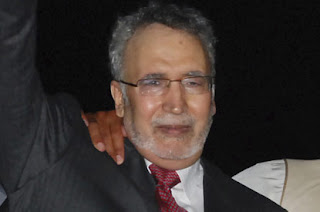 We have now learned from the Daily Mail convicted Lockerbie bomber, Abdelbaset Al Megrahi, refused chemo and skipped medication in what appears to have been a successful attempt to secure his release on humanitarian grounds for having terminal prostrate cancer. Megrahi was supposed to have 3 months or less to live. Of course that was one year ago. We now know the doctors treating his cancer weren't even consulted before his release. After President Obama claimed he was "surprised, disappointed and angry" at the release, we have found out the U.S. Government was consulted and they backed the release. Since his release to Libya, Al Megrahi has resumed taking his medication and is undergoing chemo therapy. According to doctors, he could live ten more years. How could the British have been so stupid and naive? Oh, they wanted an oil deal for BP.

Dr Andrew Fraser, the Scottish doctor responsible for assessing Megrahi’s health a year ago, had assured the Government that the bomber was resistant to treatment – assumed to mean that body was not responding. But in fact Megrahi chose to refuse the treatment, ITV have claimed. It is understood that Megrahi discussed the treatment with Scottish doctors but said he would only undergo it with support of his family, who were in Libya.

Notes of a meeting on July last year, which have been released by the Scottish Government, report that doctors told Megrahi that he needed to ‘take his medication regularly’ – suggesting that he had skipping doses that would have improved his health.

How can one say this nicely...the SOB, whether he had 3 days or 3 years to live, did not deserve humanitarian consideration because he is not human. If he refused treatment, then he would have died sooner and saved the prison system some money. Harsh?? Not to the families of all those who died at his hand.