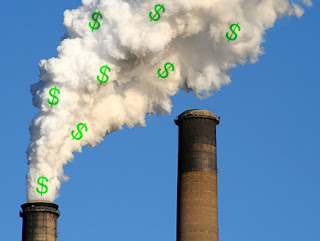 Cap and Trade has two major components. First the government sets limits for carbon emissions. The, they set up a complicated carbon trading market allowing companies who reduce emissions to sell their carbon emission allotment to others. Several other countries, who are signatories to the 1997 Kyoto Protocol, are already participating in this scheme under the auspices of the U.N.'s Clean Development Mechanism. President Obama has proposed a similar system for the U.S. Allegedly, China has figured out a way to scam the program.

An obscure U.N. board that oversees a $2.7 billion market intended to cut heat-trapping gases has agreed to take steps that could lead to it eventually reining in what European and U.S. environmentalists are calling a huge scam.

At a meeting this week that ended Friday, the executive board of the U.N.'s Clean Development Mechanism said that five chemical plants in China would no longer qualify for funding as so-called carbon offset credits until the environmentalists' claims can be further investigated.

The chemical makers are paid as much as $100,000 or more for every ton they destroy of a potent greenhouse gas, HFC-23. The price for destroying it is based on its being 11,700 times more powerful as a climate-warming gas than carbon dioxide.

The solution to generating more profits at these companies is simple. They overproduce the ozone friendly chemical in order to get paid for destroying the byproduct. This is typical of what happens when governments excessively meddle into private markets. They change in an unexpected way.
Posted by Bluegrass Pundit at 5:31:00 AM

All of global warming is a scam.