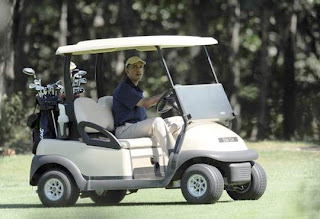 The liberal media was severely critical of former President Bush for playing golf in a time of war. He finally gave up the game and started biking in August of 2003. The media also hammered his father George H. W. Bush for golfing and fishing in a time of war. Yesterday, President Obama played his 48th round of golf in 19 months. That doubled former President Bush's 24 rounds in the three years before he quit. Most Americans wouldn't begrudge someone with a tough job a little downtime, but the contrast in the media coverage has been astounding. If a Republican were in the White House, the war in Afghanistan was going poorly, 9.5% of Americans were unemployed and the economic recovery was stalled, the liberal mainstream media would be all over them for playing golf and taking too many vacations.

Here is an example from The Washington Post of how the media reported Bush's golf outings.

Upcoming Holiday to Be No Vacation From Strife

The reporting, in the excerpt, paints President Bush as callous and nonchalant about tragedy. Of course, President Obama does have one advantage former President Bush didn't. He doesn't have to worry about questions being shouted out while he is on the golf course. He doesn't allow reporters on the golf course. That alone would have created a media storm of criticism during the Bush presidency.
Posted by Bluegrass Pundit at 5:51:00 AM