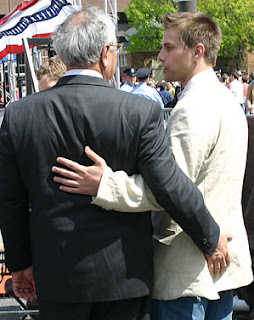 Rep. Barney Frank is retiring. He cites redistricting as the main reason. Here is my farewell message:


Don't let the door hit you an the a$$ on the way out Barney.


Rep. Barney Frank (D-Mass.) announced Monday that he will not seek reelection in 2012, ending a three-decade career in the House.

Frank, 71, is the top Democrat on the Financial Services Committee and the architect, with former Sen. Chris Dodd (D-Conn.), of the sweeping Wall Street regulatory reform law enacted in 2010.


He announced his decision at an afternoon press conference in his hometown of Newton, Mass., where he said redistricting played a major role in his retirement.

"I was planning to run again, and then congressional redistricting came," Frank said.

That is sad. I guess he could not suckseed in the whole state, just in his district.