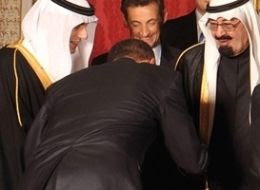 
(US News) — Despite intense and sustained efforts to woo the Arab world with money and nice words, a newly released survey of the region finds that President Obama is at the bottom of a list Arabs admire most.

Obama is admired by just 4 percent of Middle East Arabs in the new survey released by the Brookings Institution and University of Maryland.
Above him:
Keep on reading…

And neither is his repeated bowing and scraping in front of THEM. He is the official apologist for their religion-- and it SHOWS. BAD for him politically.