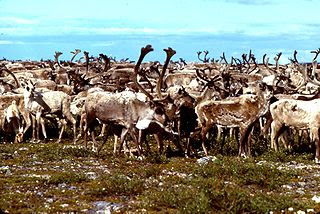 You may have heard of the Beverly Caribou herd (located primarily in Saskatchewan.) It has been considered one of the worlds largest at up to 280,000 caribou. In the last few years, scientists claim it completely disappeared. Global warming was listed as a primary culprit.


YELLOWKNIFE – Once, caribou wandered over the Arctic tundra in herds that took days to pass. So great were their numbers – even 20 years ago – that they were able to shake off man’s puny imprint on the great barren lands like so many flies on a rump.

“There was so much caribou all over that even our plane, our scheduled flights, couldn’t land on the airstrip,” recalled Alfonz Nitsiza of Wha Ti, a tiny aboriginal community northwest of Yellowknife.

“The caribou were on the airstrip. It was full of caribou, all our communities were.”

Aerial survey teams couldn’t even find enough pairs to get statistically valid data. A herd that numbered 280,000 animals only 15 years ago was simply gone...

Climate change has long been suspected as being behind the recent widespread declines.

“Weather is the only thing that would operate on that big of a landscape scale,” said Jan Adamczewski, a biologist with the N.W.T. government.

The territory is warming up faster than almost anywhere else on the globe. Temperatures already show a two-degree average increase since 1948 and higher increases further north.

Research also shows that warmer conditions are allowing southern shrubs to spread north and take over from plants such as lichen. Shrubs produce more plant material, but they aren’t very good caribou food.

“On the summer range, forage biomass is increasing, but there’s some indication that forage quality is decreasing,” Adamczewski said.

“The snow is not going to be so nice and fluffy and easy to kick aside when you want to dig through it to get your food,” said Gunn.

Higher temperatures also improve conditions for warble flies, biting, bloodsucking bugs that drive caribou crazy and impair their ability to breed by preventing them from building their strength.

It turns out the caribou weren't killed off by global warming after all. They had simple moved to a new calving ground.


A vast herd of northern caribou that scientists feared had vanished from the face of the Earth has been found, safe and sound -- pretty much where aboriginal elders said it would be all along.

"The Beverly herd has not disappeared," said John Nagy, lead author of a recently published study that has biologists across the North relieved.

Those scientists were shaken by a 2009 survey on the traditional calving grounds of the Beverly herd, which ranges over a huge swath of tundra from northern Saskatchewan to the Arctic coast. A herd that once numbered 276,000 animals seemed to have completely disappeared, the most dramatic and chilling example of a general decline in barren-ground caribou.

But Nagy's research -- and consultation with the communities that live with the animals -- concludes differently...

It turns out that the Beverly herd has simply shifted its calving grounds north from the central barrens near Baker Lake, Nunavut, to the coastal regions around Queen Maud Gulf. Nagy's analysis of radio-tracking data showed caribou in the region once thought to belong to the Ahiak herd are, in fact, Beverly animals.


"It showed that there were two different subpopulations of caribou within that area that calved along the Queen Maud Gulf," he said. "One is migratory, which I believe is the Beverly herd."

Man..look at all those steaks and burgers and pots of chili and roasts on the hoof! nom nom