TSA: We are still going to feel you up and naked scan you this Thanksgiving, but your kids can leave their smelly sneakers on 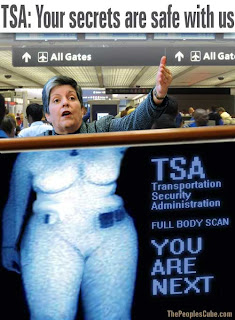 The people running TSA must be mentally deficient. Oh, It's Janet Neapolitano. In what is being billed as a major change, your kids under 12 can leave their smelly sneakers on. Groping and nude scanning will continue. Why don't they walk us all past a bomb sniffing dog after the metal detector and anyone who doesn't set off the detector or alert the dog is good to go?


WASHINGTON – This weekend marks the beginning of the Thanksgiving holiday travel surge. More than 23 million passengers are expected at the nation's airports, and to make travel a little less hectic, the federal Transportation Security Administration is showcasing some major changes to airline security.

In one key change, kids 12 and younger won't need to take off their sneakers at the screening check points. Although that change has been in place for a couple of months, the Thanksgiving rush is its first major test.

TSA chief John Pistole told Fox News that the new approach is driven by the intelligence gathered on potential threats.

“Children themselves, of course, are not terrorists. But we also know that they can be used by terrorists to do bad things, which we've seen overseas," he said. "Fortunately we haven't seen that here."

Pistole said the decisions also come down to measuring risk, because the TSA can’t protect every passenger and every airplane all of the time. “This is all about risk mitigation, risk management. It's not risk elimination,” Pistole emphasized, adding that kids are low risk compared to the shoe bomber who tried to bring down a jet over the Atlantic 10 years ago.