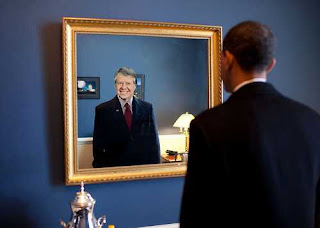 President Obama's overall approval rating is 46%. That is low for an incumbent.


Washington (CNN) — President Barack Obama’s overall approval rating remains in the mid-40s, where it has been since July, and he continues to receive much higher marks for foreign policy than for domestic issues, according to a new national survey out one year before he is up for re-election.
A CNN/ORC International Poll released Tuesday indicates that 52% of all Americans approve of how the president is handling the situation in Iraq, an indication that Americans tend to favor Obama’s decision to withdraw all U.S. troops from that country by year’s end. Forty-eight percent of those questioned approve of how he is handling the war in Afghanistan. By contrast, only 35% have a positive view of his economic track record, and just 38% approve of how he is handling health care policy.