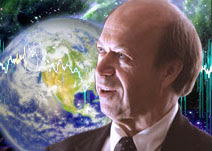 In the paper he directly and without equivocation ties the Moscow (2010) and Texas (2011) heat waves to climate change:


Thus there is no need to equivocate about the summer heat waves in Texas in 2011 and Moscow in 2010, which exceeded 3σ – it is nearly certain that they would not have occurred in the absence of global warming. If global warming is not slowed from its current pace, by mid-century 3σ events will be the new norm and 5σ events will be common.

I will let the words of Andrew Dessler professor at Texas A&M University in the Department of Atmospheric Sciences refute this outrageous claim.


I know that climate change does not cause any specific weather event.

James Hansen presides over the GISS data set. He has been accused of fudging the numbers.
Posted by Bluegrass Pundit at 6:56:00 PM

what the hell is the creator of the muppets doing claiming that climate change is real? Hey Jim..go back to puppeteering or I'll have Animal bite you in the ass. *snerk*

"what the hell is the creator of the muppets..."