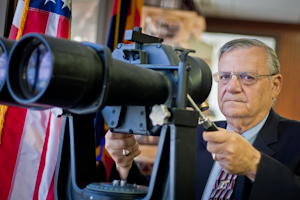 Reportedly, Rick Perry will receive the endorsement of “America’s Toughest Sheriff” this week.

Sheriff Joe Arpaio, the sheriff of Maricopa County, Ariz., who calls himself “America’s Toughest Sheriff,” will endorse Texas Gov. Rick Perry next week, a source with knowledge of the endorsement told ABC News.

Arpaio espouses a hard-line stance on illegal immigration, leading raids to round up and jail illegal immigrants, and was a major proponent of the controversial Arizona immigration law. Perry has spoken with Arpaio several times over the phone since entering the presidential race.

Arpaio, a much sought after endorsement in the GOP field, plans to campaign with Perry in New Hampshire next week, the source said. The Texas governor will be in the Granite State Tuesday and Wednesday, holding three town halls and a breakfast at the Nashua Chamber of Commerce along with speaking at the New Hampshire State House.