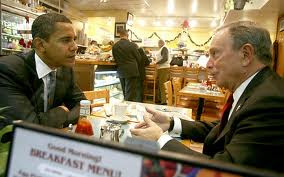 You have to wonder if Bloomberg actually wants Obama to win in 2012.


(Politico) — New York City Mayor Michael Bloomberg said Tuesday there is only one option for President Barack Obama in the wake of the supercommitte’s failure: Announce he will veto any extension of the Bush-era tax cuts.

“All the president has to do — and I’m not trying to hold him more responsible, but he is the chief executive, he was elected to lead this country — all he’s got to do is stand up and say, ‘I will veto any extension of any of the Bush-era tax cuts’,” Bloomberg told MSNBC’s Andrea Mitchell. “Everybody. Not just the rich, but everybody.”

If Obama promises to use his veto pen, Bloomberg said, that takes the issue of taxes off the table and would spur both parties in Congress to start working together to negotiate “intelligent” spending cuts.

“If you’re going to close the deficit, you have to increase revenues and reduce expenses,” Bloomberg said. “Anybody who says you can do with one or the other is either just stupid or not telling the truth.”

Bloomberg said if Obama follows his advice, it would not only solve the country’s problem — it would also be the president’s “ticket to re-election.”