Obama is front and center in battleground states 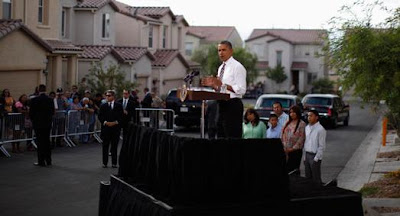 Confirmed: President Obama is campaigning on the taxpayer's dime.

From The Wall Street Journal:


When President Barack Obama jets to Scranton, Pa., Wednesday to promote his jobs package, he'll log his 56th event in a presidential battleground state this year, putting him well ahead of President George W. Bush's record-breaking swing-state travel in 2003. ...

Between Jan. 1 and Nov. 17 of his third year in office, Bill Clinton held 40 events over 24 days in the battlegrounds of his time, according to data compiled by Brendan Doherty, a US Naval Academy assistant professor who is widely viewed among political scientists as an expert on presidential travel. Over that same stretch, George W. Bush held 49 events in 34 days, drawing complaints from Democrats. ...

In an electoral system where winning swing states is crucial, Obama's 11 events in Virginia, 10 in Florida, eight in Pennsylvania and seven in North Carolina are to be expected, said Doherty. Obama also has granted about 50 interviews this year with local news outlets, the majority from swing states.