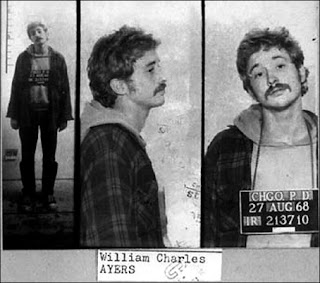 A former Weather Underground terrorist is teaching Occupy Chicago non-violence. You just can't make stuff like this up.

Filmed last month by Education Action Group, EAG-TV, and posted on their YouTube page, the video shows Ayers teaching a group of protesters in a "teach-in."

Ayers made headlines in 2008 when his connection to then-candidate Barack Obama were crystallized -- perhaps most notably -- by Sarah Palin who accused Obama of "palling around with terrorists."

During the teach-in, Ayers preached inclusion. When asked if violence was a necessary step to increase the Occupy movement, Ayers tells the listeners violence is not the answer instead protesters should use their brilliance, humor, wisdom and body to "dramatize the violence that exists".

Um, the same Bill Ayers who refuses to denounce the Weather Underground violence? What's he playing at?