Israeli Defense Minister Ehud Barak: The “time has come” to deal with Iran 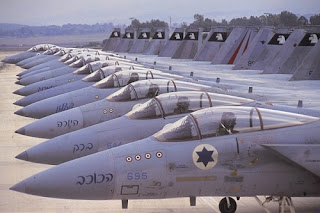 President Obama is willing to help take out a weak country like Libya, but he lack the "cahones" to take on Iran. The Israelis don't have a choice.

Barak, speaking on CNN’s Fareed Zakaria GPS program, indicated that Israel’s patience was wearing thin — and provided an ominous response when asked about the growing speculation of an Israeli military strike.

“I don’t think that that is a subject for public discussion,” he said. “But I can tell you that the IAEA report has a sobering impact on many in the world, leaders as well as the publics, and people understand that the time has come.”

The International Atomic Energy Agency published a report on November 8 saying there was “credible” information that Iran was carrying out “activities relevant to the development of a nuclear explosive device.”

I do not understand why this is a concern of ours?

Last time I checked, Iran is half way around the World from us.

The Israeli's SHOULD deal with it, because it is in their back yard so so speak.

When Iran developes a bomb and USES it against US, or one of our allies, then and ONLY then should it become our concern.

Of course you let them know in no uncertain terms what the consequences of using such a weapon would be, but we should NOT interfere with them developing weapons to protect their land, like their Government or NOT, it is what the PEOPLE of Iran have allowed.

We should keep our nose out of it until such a time that Iran uses this weapon.

And then the full wrath of our might should rain down on them.

Who was it that said:

Actally nobody said "Walk" softly and carry a big stick...although obama walks softly as he leads from behind...which to me sounds an aweful lot like Sir Robin from Monty Python and the holy grail...in that he Bravely Ran Away. Iran will totally destabilize what is already a very unstabe middle east...and the last thing you want to do is have to face a nation with military force once they have the weapon...at that point your options are much more limited. I'm guessing by your statement you must be a Ron Paul supporter and as much as I admire Paul...his isolationist approach is suicidal. He fails to understand certain principles that will always exist in this world in that....evil will always seek out good to destroy it and darkness will always attempt to put out the light. If you sit back and pretend that what goes on over there is not our concern...it will only take about a decade for all democracy over there to fall and then everone who has nukes will all be pointing them at us...and then we are screwed.

I thought about that a little AFTER I wrote it:

But the bulk of your comment just doesn't compute for me;

I would suggest it is our ARROGANCE, thinking that we are the "leader" of the World, that we can "tell" other Countries what, when, where and how they can do this or that, that has gotten us in to the mess we are in now.

Your comment that "Iran will totally destabilize the Middle East", my question is:

Why haven't they done that already?

Let me ask you this:

Did you watch Bloomberg yesterday? Did you hear WHY the man in New York wanted to blow up police cars, and terrorize NYC?

Paul said EXACTLY that at one of the debates and was booed. Why in the World would Paul be booed for actually UNDERSTANDING why the Islamists are upset with us?

And why would our options be limited if Iran gets a Nuke? They can only use it as many times as they have it, and if they know what the consequences are for them using it, then as they say the "ball is in their court".

One of these days we will realize that we are NOT, and have NEVER been the "leader" of the World. We are but ONE Country in a large World, and we will NOT and can NOT solve every Country's problems.

Hell, we can't even solve our OWN problems, and for us to stick our nose in everyone else's "business", is ARROGANT.

When do we concentrate on our own issues?

I believe it is time, and I believe Paul, although he doesn't come across as the brightest bulb in the box, is the ONLY Candidate who has REAL solutions to our issues.

What IS clear is that the "solutions" we have in place now sure are NOT working.

For you to suggest that within a decade all "Democracies" in the Middle East will fall, simply shows that YOU have been indoctrinated in believing that we are the "know all". The FACT is that the PEOPLE of any Country over there dictates what type of Government they have. We can NOT dictate what type of Government ANY Country has.

I appreciate your response to my comment, but it is my opinion that the arrogance of the United States, believing that we have solutions to every problem in the World, and that we stick our nose in to every issue in the World does nothing but give our enemies fuel for their burning fire of hate for us.

That's the message Paul tries to get out there, but the media and other Candidates "buy in" to the notion that we are the World's "leader" when in reality, trying to play the role of "leader" is the REASON we are hated by so many around the Globe.

Let other Countries solve their OWN problems.

We have enough on our plate trying to solve our OWN issues.

To be the LEADER of the World you have to set the example.

The only way we can become what we once was in the World is IF we solve our OWN issues, and show the World how it is done.

Right now, the rest of the World looks at our problems and says;

"Hell, they can't even deal with their own issues, how can they deal with ours also?'

It is also my opinion that IF we deal with our own issues, we wouldn't have to tell the rest of the Countries what to do, because they could simply look at how we dealt with our issues, and see what they have to do.