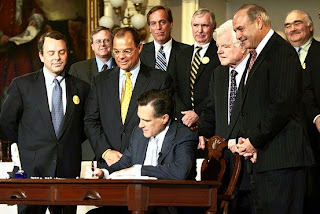 This is why Mitt Romney will not be the GOP presidential candidate in 2012. Anyone who thinks it is OK for the government, even on a state level, to force citizens to buy a private product because they are alive and live in that state has no understanding of the word "liberty."


Mitt Romney refused to criticize his Massachusetts health-care program tonight, saying he would prefer to lose the primary rather than renounce it.

“I’m standing by what I did in Massachusetts,” Romney said on Fox News Channel’s Special Report with Bret Baier. “I’m not trying to dust it aside. I’m absolutely firm that it was the right thing for our state. I’ll defend that and I understand it has political implications. And if it keeps me from winning a primary, so be it. But that happens to be the truth.”

“It’s by far, the biggest challenge I have in the primary race,” Romney admitted, before going on to criticize his rivals. “And if I were willing to say anything to get elected, wouldn’t I just say, ‘oh, it was a mistake,’ because I’ve watched other people on the stage when they talk about their cap-and-trade policies, they say, ‘oh, that was a mistake.’ When someone says, ‘oh, I did this ad on global warming,’ that was a mistake. So they’ve just brushed it aside.”