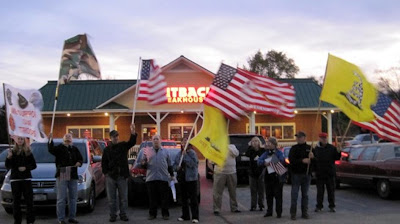 Screen Capture Via McHenry County Blog
According to the waitress, a couple complained to management. They were offended the bracelet was associated with the Tea Party.


CRYSTAL LAKE – Tea party members, conservative bloggers and radio hosts are rallying in support of a Woodstock waitress who says she was fired from the Crystal Lake Outback Steakhouse for wearing a political bracelet and admitting tea party sentiments.

Twenty-three-year-old Megan Geller of Woodstock said that a couple dining at the restaurant in early October took offense to a bright yellow bracelet with the words "Don't Tread On Me" imprinted on it.

"Megan Gellar was not let go because of her tea party bracelet," Kadow said in a statement to the Northwest Herald. "On the night in question two separate tables complained about her lack of attention."

When the manager spoke to Geller about these complaints, she responded by yelling at him with a hostile attitude and that led to her termination, Kadow said.

Geller says she told the diners her mother, Tonya Franklin, gave her the bracelet after Franklin received it at a tea party event. Those last three words incensed the couple, who then asked for the manager, Geller said. Keep on reading...