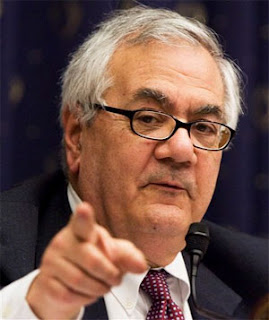 Democrats never planned for the super committee to succeed. Mitch McConnell and John Boehner were very naive to make a deal with Democrats.


(The Hill) — Rep. Barney Frank (D-Mass.) said the congressional supercommittee’s failure Monday to come to an agreement on spending reforms was “good news” because it will help to end the Bush-era tax cuts and give Democrats more bargaining power in budget negotiations.
Groups on the edges of both the liberal and conservative spectrums have cheered the death of the supercommittee. Liberal groups like the Progressive Change Campaign Committee were happy that programs such as Social Security and Medicare were spared, while Tea Party conservative groups applauded the breakdown in talks because no tax increases emerged from the deficit-reduction panel.

The supercommittee’s failure to reach an agreement sets in motion $1.2 trillion in automatic spending cuts set to take effect in 2013 through sequestration.

Half of those cuts are to defense initiatives, which has hawks in Congress vowing to undo them. House Armed Services Committee Chairman Buck McKeon (R-Calif.) said Monday that he was readying a bill that would prevent the defense cuts.