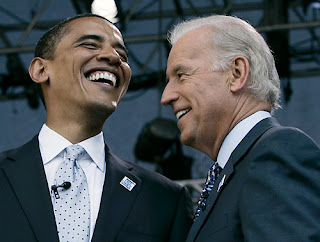 All they have to risk with VP Joe Biden is another gaffe. Barack Obama is toxic in many battleground states.

WASHINGTON (AP) — A year from Election Day, Democrats are crafting a campaign strategy for Vice President Joe Biden that targets the big three political battlegrounds: Ohio, Pennsylvania, and Florida, states where Biden might be more of an asset toPresident Barack Obama’s re-election campaign than the president himself.

The Biden plan underscores an uncomfortable reality for the Obama team. A shaky economy and sagging enthusiasm among Democrats could shrink the electoral map for Obama in 2012, forcing his campaign to depend on carrying the 67 electoral votes up for grabs in the three swing states.

Obama won all three states in 2008. But this time he faces challenges in each, particularly in Ohio and Florida, where voters elected Republican governors in the 2010 midterm elections.