In October, Massachusetts Democratic Senate candidate Elizabeth Warren claimed to be the intellectual creator of the Occupy Movement.


Many politicians have been wary to identify with the Occupy Wall Street protesters, but Massachusetts Democratic U.S. Senate candidate Elizabeth Warren has taken credit for planting the intellectual seeds that spawned the movement.

“I created much of the intellectual foundation for what they do,” said Warren in an interview with the Daily Beast. “I support what they do.”

The Occupy Wall Street movement started Sept. 17, according to occupywallstreet.org, and despite massive turnout, the movement didn’t receive much media attention until weeks later. Protests have since spread from multiple cities across the U.S. to cities as far away as Tokyo. 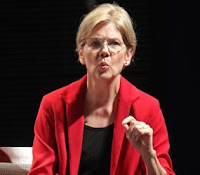 U.S. Senate hopeful and Harvard Law prof Elizabeth Warren, who has claimed she laid the “intellectual foundation” for the Occupy Wall Street movement, is jilting the anti-corporate proteges in her own Ivy League yard, refusing to sign a petition in support of Occupy Harvard.

Warren, who declined to speak to the Herald, is focused on her campaign, said spokesman Kyle Sullivan.

“Elizabeth hasn’t signed the petition, but she’s been standing up to Wall Street and the big banks for years and that’s what she’ll do in the Senate,” said Sullivan in a statement. “People are frustrated and protesting for change, Elizabeth understands that.”

Perhaps she saw this PPP Poll.


The Occupy Wall Street movement is not wearing well with voters across the country. Only 33% now say that they are supportive of its goals, compared to 45% who say they oppose them. That represents an 11 point shift in the wrong direction for the movement's support compared to a month ago when 35% of voters said they supported it and 36% were opposed. Most notably independents have gone from supporting Occupy Wall Street's goals 39/34, to opposing them 34/42.