Heartache: Russian Newscaster who gave Obama the finger has been fired 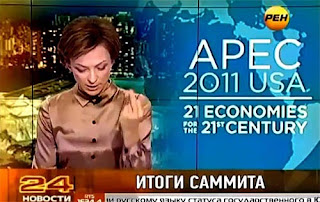 The Russian Newscaster who gave Obama the finger in a live newscast has been fired. The station claims she was giving the finger to some of her coworkers off screen.


A top Russian female newsreader who appeared to defiantly show US President Barack Obama her middle finger during a live newscast has been fired. Online footage of the incident involving news anchor Tatyana Limanova went viral in both Russia and the West causing REN TV, her employer, huge embarrassment.

To broadcast bosses’ horror, Ms Limanova was caught mechanically raising her left arm and showing the camera her raised middle finger after referencing US President Barack Obama.
REN TV, a privately owned channel controlled by associates of Vladimir Putin, the prime minister, said on Thursday it had decided to take her off air calling her actions “unacceptable” and “unprofessional”.
“On 14 November during the ‘News 24′ programme the presenter Limanova made an unacceptable gesture that was a synonym for an offensive expression,” it said in a statement.

The channel, which is broadcast to 120 million people, claimed the gesture was intended for her colleagues in the studio rather than for President Obama.

pity. more newscasters need to give him the one finger salute.