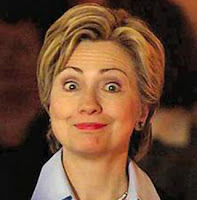 Hillary Clinton's pantsuit must be cutting circulation off to her brain or something.


(Daily Mail) — Hillary Clinton has risked a huge backlash after sympathising with those who rioted in support of the officials caught up in the Penn State ‘abuse’ scandal.

The Secretary of State said she could understand the ‘passion and emotion’ of the students who flooded the streets and overturned cars when they learned football head coach Joe Paterno had been fired.
She said that two members of her own family had gone to Penn State and made the team so she could appreciate their point of view.

Her poorly chosen comments are likely to enrage the families of the victims, who are still coming forward with fresh accusations.