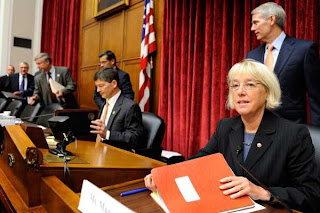 
Washington (CNN) -- Members of the "super committee" charged with coming up with $1.2 trillion in budget cuts are focused on how to announce failure to reach a deal, Democratic and Republican aides confirmed to CNN Sunday.

While aides said no final decision had been made, they acknowledged that -- barring an unforeseen development -- an announcement of an end to negotiations is the most likely scenario.

Talks on trying to reach a deficit reduction agreement are essentially over and discussions are focused on a Monday announcement, a senior Democratic aide said.

Another senior Democratic source said, "No decisions or agreement has been reached concerning any announcement or how this will end. But, yes, the likely outcome is no agreement will be reached.

You "reap" what you sow.

We had a chance to actually do SOMETHING about the National Debt a few months back, but we simply kicked the can down the road, and this is our "reward".

One of these days we will get actual GROWN UPS in there that will do what is best for the COUNTRY instead of what's best for their pocket books.

It really is a sad time we are living in.