Sad: While you were having your Thanksgiving turkey, President Obama signed a law allowing Americans to kill and eat horses 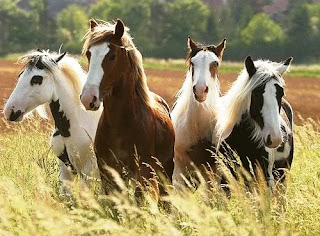 Anthropogenic global warming believers must be pleased. They have suggested we eat our pets.


(Technorati)- Horse slaughter plants are legal again in the United States. Restrictions on horse meat processing for human consumption have been lifted. courtesy of Google Images

In a bipartisan effort, the House of Representatives and the United States Senate approved the Conference Committee report on spending bill H2112, which among other things, funds the United States Department of Agriculture. On November 18th, as the country was celebrating Thanksgiving, President Obama signed a law, allowing Americans to kill and eat horses. Essentially, one turkey was pardoned in the presence of worldwide media while in the shadows, buried under pages of fiscal regulation, millions of horses were sentenced to death.

Horse slaughter has been prohibited in the United States as funding for inspections of horses in transit and at slaughter houses was non-existent. This worked because the horse meat cannot be sold for human consumption without such inspections. The House version of the bill retained the de-funding language and the Senate version did not. The conference committee charged with reconciling the two opted to not include it. The result is that it is now legal to slaughter horses for humans to eat.

and the last wild herd of American mustangs will be among the 1st to go..you watch.

Turned out to be a hoax. Try and find Spending Bill H2112 in any official records.

"Turned out to be a hoax. Try and find Spending Bill H2112 in any official records.

Here is another article.

They might have done this because they know how are things are going to get in this country. They know that there might be a shortage of beef cattle before things get better. I would suggest that everyone become more aware of where this unconstitutional government is leading us. It's not a pretty place. I would suggest stocking up on food and other supplies. Don't forget plenty of ammo. You may need it for your self defense.