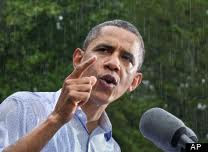 This is what a candidate has to do when he has no record to run on.


WASHINGTON (AP) — President Barack Obama’s campaign has spent nearly $100 million on television commercials in selected battleground states so far, unleashing a sustained early barrage designed to create lasting, negative impressions of Republican Mitt Romney before he and his allies ramp up for the fall.

In a reflection of campaign strategy, more than one-fifth of the president’s ad spending has been in Ohio, a state that looms as a must-win for Romney more so than for Obama. Florida ranks second and Virginia third, according to organizations that track media spending and other sources.

About three-quarters of the president’s advertising has been critical of Romney as Obama struggles to turn the election into a choice between him and his rival, rather than a referendum on his own handling of the weak economy. Obama’s television ad spending dwarfs the Romney campaign’s so far by a margin of 4-1 or more. It is at rough parity with the Republican challenger and several outside GOP-led organizations combined.

They appear positioned to outspend the president and his allies this fall, perhaps heavily.