$3 trillion in spending and the Dow tanks 382 points 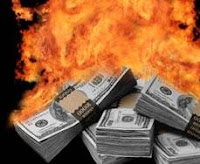 The Obama administration, Federal Reserve and Senate committed $3 trillion dollars to shore up the economy today. In response, investors sent the Dow Jones average plunging 382 points. This is a strong vote of 'no confidence' in the way Democrats are handling the economic crisis. Investors know this money will mostly be wasted on things that have nothing to do with the economy. I would bet that an announcement by President Obama and Congress of deep cuts in corporate, capitol gains and personal income taxes would send the stock market soaring. Of course, that will not happen. Barack Obama and the Democrats are much more interested in funding their social agenda and paying off their political supporters than they are in stimulating the economy. They figure the economy will rebound on its own by the 2012 election cycle. There is little chance the Republicans can take control of either house of Congress in 2010.

WASHINGTON (AP) - On a single day filled with staggering sums, the Obama administration, Federal Reserve and Senate attacked the deepening economic crisis Tuesday with actions that could throw as much as $3 trillion more in government and private funds into the fight against frozen credit markets and rising joblessness.

"It's gone deep. It's gotten worse," President Barack Obama said of the recession at a campaign-style appearance in Ft. Myers, Fla., where unemployment has reached double digits. "The situation we face could not be more serious."

If any more emphasis were needed, Wall Street investors sent stocks plunging, objecting that new rescue details from the government were too sparse despite the huge numbers. The Dow Jones industrials dropped 382 points. (excerpted) read more at breitbart.com

Knit your own spaghetti will be the way forward!

"Knit your own spaghetti will be the way forward!

Hmm... I don't understand your comment and your website is very obscure. Thanks for dropping by anyway.

now that's not a good thing. i like obama. i like the democrat point of view. but then again, we can all see what's happening to the economy. but honestly, if we can't go any lower, all we have left to go is up, right? ;)