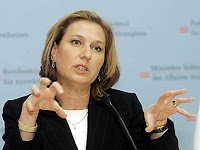 The note, which Livni handed to outgoing Prime Minister Ehud Olmert of Kadima at the weekly cabinet meeting, set the battle lines in what could be weeks of political bargaining after Israel's inconclusive election last Tuesday.

Shortly after polls closed, both Livni and Netanyahu laid claim to the premiership, deepening uncertainty over the course Israel will follow after last month's Gaza war and in peace negotiations with the Palestinians.

Kadima won 28 seats in the 120-member parliament to Likud's 27, but a strong rightist bloc that emerged in the vote appeared to give Netanyahu the edge in putting together a governing majority. (excerpted) read more at reuters.com

This won't make peace in the Middle East easier. There won't be a land for peace deal under Likud rule.