China tops USA in car sales for the 1st time ever 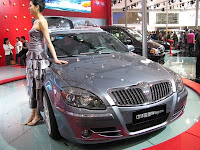 China sold more vehicles in January than the United States. The US auto market is sinking into a deeper gloom. Manufacturers are trimming back their sales forecasts to suppliers and adding additional shutdown or idle times to their lines. Sales in the US are predicted to be less than 10 million units. This is a 26 year low. Unfortunately, this may be an optimistic estimate. Meanwhile, the Obama Administration is taking moves to make cars and trucks more expensive in the US. He is adding a hidden fuel mileage and pollution "tax" by government regulation. GM and Chrysler LLC are teetering on the edge of bankruptcy. They may go bankrupt in spite of a bailout. Also, many of the major parts suppliers are near bankrupt. There are dark days for the US auto market. There is a little something in the Senate version of the stimulus bill to help car sales. You will be able to deduct some interest on a new car loan. I seriously doubt that will be the determining factor in anyone buying a new car. You won't recoup any of that reduced tax liability until you file your return a year later. The Obama Administration has no viable plan to save the US auto market. They will keep throwing tax dollars at the big three in order to keep the UAW alive.

With its growing middle class and vast potential as a consumer market, China is vital for global automakers such as General Motors, Volkswagen and Toyota as they count on demand here to offset weakness in the U.S. and elsewhere.

Some 735,000 vehicles were sold in China in January, the China Association of Automobile Manufacturers said. That surpassed the 656,976 units that consultant Autodata Corp. said were sold in the United States in the same month.

But China's ascent has been hastened by the dramatic plunge in the U.S. auto market, where sales tumbled 37 percent in January to a 26-year low.

This is really very sad.

The communists there have created more free markets.

He wants us all to die to save the planet. He hates white people in particular... and his pastor preaches like that so we know it's true (they said Bush hated black people... so let's take a look at how much Obama hates white people - since HIS pastor literally expressed hate often publicly for white people - 'white Amerikka').

Meanwhile, China becomes the new US. Appalling. We need a new and free USA in the red states free of DC, imo. I think they should vote to secede.

I think multiple things come to play in this issue. Gasoline prices continue to rise with no end soon in sight, money/credit have been crunched, and public transit now provides a cheaper alternative. While car sales affect many people, we should not frown upon the use of public transit.

I dislike how the auto industry has been allowed to irreparably collapse. I tend to doubt that bailouts can save both of the big two (GM & Chrysler). I am no economist, but I see GM surviving and Chrysler liquidating. This downturn in the auto market has already cost us many jobs, and liquidation of one of our largest companies will cost us thousands more high paying jobs. Nonetheless, while the auto industry has collapsed, we must express some appreciation that the public transit industry has not only expanded, but will grow much more so with the new stimulus package. Take a visit to any major city in the Northeast and view what wonders public transit has done to many areas. Formerly dead areas awaken with new life with the addition of a train: when people take the train they also need places to drink coffee, grab a bite to eat, read a paper, and so on. I do not suggest that we simply ignore what has happened to the auto industry-- it needs help. But the resurgence of public transit does offer a slim ray of hope.