Brace for impact. The economy is crashing. 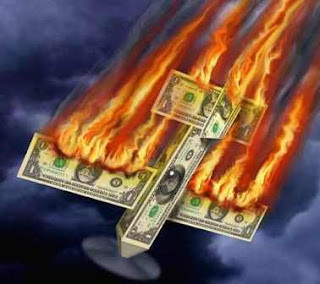 The economy will crash deeper into recession in the 2nd half of 2009. Previous predictions of a second half recovery are not expected occur. The economy will actually get worse later in 2009. Unemployment will rise to a level above 9%. The economy is expected to shrink by almost 2% this year. That will make this the worst economic contraction since 1982. This gloomy news comes from leading forecasters in the latest survey by the National Association for Business Economics.

Brace yourself: The recession is projected to worsen this year.

The country stands to lose a sizable chunk of economic activity in 2009 as consumers at home and abroad retrench in the face of persistent economic troubles.

And the U.S. unemployment rate—now at 7.6 percent, the highest in more than 16 years—is expected hit a peak of 9 percent this year.

That gloomy outlook came from leading forecasters in the latest survey by the National Association for Business Economics to be released Monday. (excerpt) read more at cnbc.com

Email ThisBlogThis!Share to TwitterShare to FacebookShare to Pinterest
Labels: economy

At best, I'd say we are half-way to the bottom now. The biggest episode to occur, will be when folks decide to quit paying Master Card and VISA. The Feds will be standing there and scratching their head because they really can't pay this bill.

The key problem though between 1930's depression and 2010 depression....folks will not be very patient with Obama when they realize their local airport is running ten percent of the normal flights, half the resturants are closed, and you see less than 20 of the normal crowd at the mall. No one talks about spending money, and most folks want to blame this on someone.

Is depression here or not? not very clear. But if you look at the past history recessions and depressions come and go. Economies go through cycles and recession is part of the cycle.

In the mean time, I just came across a very helpful website on the current economic downturn and employment: