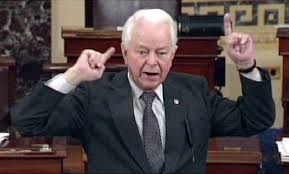 Sen. Robert Byrd (D-W.Va) is accusing President Obama of a power grab. Sen. Byrd is concerned that the appointment of "czars" to oversee federal policy, instead of Senate approved cabinet officials, will threaten the system of checks and balances. Ironically, this is the same thing President Bush was criticized for.

In a letter to Obama on Wednesday, Byrd complained about Obama’s decision to create White House offices on health reform, urban affairs policy, and energy and climate change. Byrd said such positions “can threaten the Constitutional system of checks and balances. At the worst, White House staff have taken direction and control of programmatic areas that are the statutory responsibility of Senate-confirmed officials.” (excerpt) read more at politico.com

From my list of predictions for 2009:
Barack Obama will find that his biggest obstacles lie within his own party. Congress will grow less cooperative by the day.

And so it begins. Obama still has a big lead on them in public opinion. they should sit down and wait for that to drop before they try their power grab.