Lack of confidence in Obama is dropping the DOW 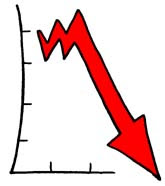 Investors are refraining from buying stocks because they are uncertain about how the administration of President Barack Obama will handle the worst financial crisis since the Great Depression. There is no confidence by investors that the bloated stimulus bill will do anything for the economy in any reasonable time frame. Investors were hoping for a tax cut, but they are now expecting tax increases instead. When you add the talk of nationalizing banks to this witches brew of economic problems, the Dow may see 6000 before the slide stops.

New York stocks tumbled Monday with the Dow Jones index ending at its lowest level in 11 years and nine months on increased pessimism about the future of the U.S. economy.

The Dow fell three trading days in a row, losing about 440 points during the period.