Taxing the rich at 100% won't pay for Obama's budget 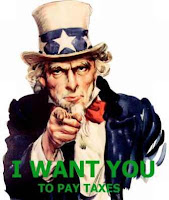 The Wall Street Journal has reported that taxing the rich at 100% won't pay for Obama's budget. Barack Obama promised not to raise taxes on anyone making under $250,000 per year. Where is he going to get the money? The numbers indicate Obama will need to take 100% of the income of everyone making over $75,000.

The 2% Illusion
Take everything they earn, and it still won't be enough.

President Obama has laid out the most ambitious and expensive domestic agenda since LBJ, and now all he has to do is figure out how to pay for it. On Tuesday, he left the impression that we need merely end "tax breaks for the wealthiest 2% of Americans," and he promised that households earning less than $250,000 won't see their taxes increased by "one single dime."

This is going to be some trick. Even the most basic inspection of the IRS income tax statistics shows that raising taxes on the salaries, dividends and capital gains of those making more than $250,000 can't possibly raise enough revenue to fund Mr. Obama's new spending ambitions.

A tax policy that confiscated 100% of the taxable income of everyone in America earning over $500,000 in 2006 would only have given Congress an extra $1.3 trillion in revenue. That's less than half the 2006 federal budget of $2.7 trillion and looks tiny compared to the more than $4 trillion Congress will spend in fiscal 2010. Even taking every taxable "dime" of everyone earning more than $75,000 in 2006 would have barely yielded enough to cover that $4 trillion.(excerpt) read more at online.wsj.com

the sad part about all this is, obama was telegraphing these punches for years and there are still some who are surprised. i mean, he wasn´t even a wolf in sheep´s clothing; he was just a wolf that walked around telling them he was a sheep. and the sheep all bought it! now he and his pack are just taking over.

but, conservatives are rallying, so there´s hope.

anyway, thanks for the visit. i´ll add you to my blogroll. always looking for more co-conspirators :-)

As Mike said, given his liberal lineage, this should come as no surprise.

Can we survive the "Not so Dark Knight"?

Band together and never forget.

Never give in, never give up and never again.