Ashley Judd is an idiot 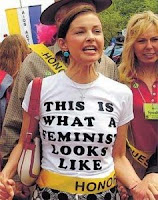 Ashley Judd has become an embarrassment to the state of Kentucky. If you have ever watched Jerry Springer or America's Dumbest Criminals, you realize how difficult that is to do. She has stopped drinking the cool aid and started eating the powder straight from the package. In September she declared that “a woman who votes for McCain-Palin is like a chicken voting for Colonel Saunders.” Now she is in an ad for a far left animal rights group protesting Governor Palin´s support for aerial wolf hunting. Ashley Judd seems to still be suffering from Palin Derangement Syndrome.

Here are some of her recent pronouncements on the state of affairs in the country. She kicked off her trifecta of stupid back in September by declaring that “a woman who votes for McCain-Palin is like a chicken voting for Colonel Saunders.” Got it? In Ms. Judd’s world any woman who is not for a strict liberal agenda is a moron. This is how she’s reaching out to the right and uniting the country under her new hero President Obama. Have you ever noticed that when a leftie talks about coming together or uniting the country or ending partisan politics that what they really mean is that conservatives should drop their core beliefs and do what the left wants? When Bush was in the White House dissent was their patriotic duty. Now if you’re not lock step with the BHO agenda you’re an irrational, obstructionist fascist.

After the election she made a snarky comment about how now that Bush was out of office it was nice to be living in America again. I have to be honest here and admit I wasn’t crazy about everything Bush did while in office. In fact, in a past blog I named him the greatest Democrat President ever. But she was speaking about “reproductive rights,” which is political correct speak for unfettered abortion. I challenge her to find one woman in this country who was prevented from or prosecuted for having an abortion the past eight years. As easy as it is to toss around accusations in this country, I wonder how long Ms. Judd’s political activism and support of women and gay rights would play in Tehran?

Then this week Ashley voiced an ad for a far left animal rights group protesting Governor Palin´s support for aerial wolf hunting. Again, I don’t know what world Ms. Judd lives in where the lives of wolves are more important to her than the lives of unborn children, but since she supports unfettered abortion and opposes the killing of wolves one must assume in her morality wolves trump kids. (excerpted) read more at bighollywood.breitbart.com

FYI, you can download a copy of the anti-Palin propaganda coloring page:

color it in with pro-Palin propaganda & upload the finished product here:

Judd has two brain cells and they're fighting.

I think Ashley Judd is the best thing to come out of Kentucky in years. You are, after all, a state known for little other than God, guns, and brothers playing with sisters.

As to her position on abortion, which is the position of the majority, if you Jesus Jumpers continue to insist on banning it then it will go to the back alley butchers. You will never stop the practice of women practicing their constitutional and human rights. All you will do is criminalize it.

If I can call guys on your side deluded right wing fools then you can call Ashley Judd an embarrassment. An hot and tasty embarrassment by the way. I take no offense IR.

great post!ashyley judd is an idiot!

I wish she would just SHUT UP AND ACT.

I wish she would just SHUT UP AND ACT."

She is actually a fine actress. She is very popular here in Kentucky. However, celebrities should remember to stick with issues that will not anger half the people in this country. I will have trouble watching her now.

So she'll gladly do the utopian peace and love thing and just put herself between the wolves and their prey --- trusting, trusting, trusting, in the goodness and kindness of the wolves to negotiate in good faith. Because, probably, it's just an economic issue and if the wolves and the caribou just lived in a socialist state - there would be no more war and there would be no more wolves eating caribou. The wolves would lie down with the caribou, the lions would lie down with the lambs... and nirvana would arrive.

Let's see Ms. Judd negotiate unarmed and without preconditions with the wolves standing between them and their prey.

I think it would be a great education. In fact, who knows?? Maybe we should add another facet. We'll have Governor Palin standing their with a loaded shotgun. Let's see if Ms. Judd would cry out as the wolves circle her and ask Governor Palin to shoot them for her.

I'd just be curious to see how she'd respond to this scenario... great wolf defender that she is. She acts like they are not bloodthirsty predators who live by killing other animals - and as if there would be no more killing if only wolves were allowed to live free. How crazy is that?? It's not a Hollywood set. It's real life. And it's predatorial. It's a jungle out there.

I want my money back, for every movie I've ever watched with Ashley Judd in it. She also calls aboration "a woman's right to privacy". My right to privacy is sitting in my home and not having a jughead sitting outside my home, looking in at me. Killing a baby is not about privacy, it's about living a selfish life and choosing to end another life so I don't get stretchmarks, miss my trip to Europe, or so I can finish school.
I love animals and don't want wolves killed unless they absolutely have done some harm, but if they are killed, they are shot and apparently suffer no fear, pain, agony, or betrayal. Aborted babies suffer all of these things. Despite what Ashley and all of her pro-abortion counterparts want you to believe, abortion isn't a warm and fuzzy lazer beam going into a woman's uterus and *poof* the baby is gone. Abortion is violent, painful, harmful to the well being of the mom (physical, emotion, spiritual) and just dead wrong.
I'm going to go pray for Ashley now that even if she doesn't change her heart against unborn babies, she shuts up about it. Stop promoting abortion, Ashley Judd. God is pro-life.