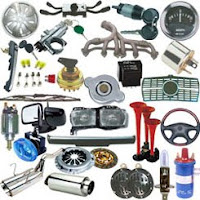 After dropping $17.4 billion in what was only the first installment of the Automotive bailout, the auto parts suppliers are lining up for their turn. Many of the auto parts suppliers are in as bad a shape as the "Big Three". Auto parts have always been a competitive business with slim profit margins. The auto manufacturers are always pitting the suppliers against each other for bidding. Every year they call the suppliers up and demand a price reduction. Recently, the skyrocketing price of steel has taken a heavy toll on suppliers. The auto manufactures have refused to accept all of the price hike and delayed paying any price hike for as long as they can. The "Big Three" have had no choice except to squeeze their supply base. They can not significantly cut labor costs because of the UAW (click here to see a UAW contract.) Now, car sales volumes have collapsed. This greatly reduced volume is pushing up the fixed costs associated with every auto part. The result is suppliers are bleeding red ink on their financial statements. Many were in the red before the downturn. Very few American auto parts suppliers will be able to make a profit for fiscal year 2009. Most are closing plants or implementing layoffs. Several auto parts suppliers are on bankruptcy watch. It would only take the collapse of one major supplier to bring the house of cards down. Lack of a single part can shut down auto assembly lines. These parts can not be easily replaced. Often, the lead time for getting a part from a different supplier is over one year. This is because materials have to be sourced, tools and dies have to be made and trial parts have to be verified. Either the Obama Administration will bailout the suppliers or money will be added to the Auto bailout and the "Big Three" will bailout their supply base. Once the commitment was made to save Detroit from bankruptcy, no other option was left.

By Soyoung Kim and Kevin Krolicki

DETROIT (Reuters) - U.S. auto suppliers said on Thursday the industry was in talks with the U.S. Treasury to secure emergency funding to avoid a wave of bankruptcies and a deeper crisis for cash-strapped automakers.

The talks between the parts suppliers and the Obama administration come as General Motors Corp (GM.N) and Chrysler LLC race to meet a February 17 deadline to show U.S. officials they can be made viable after receiving $17.4 billion in aid.

Auto suppliers have presented three options to U.S. officials as they press for a bailout that would follow and extend the government support for GM and Chrysler and their affiliated finance companies.

Taken together, the supplier proposals include requests for some $25 billion in assistance, an amount that would double the U.S. government's commitment to the auto sector at a time when sales are at their lowest since the early 1980s. (excerpted) read more at breitbart.com