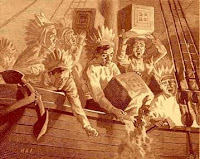 Our founding fathers would have been outraged. Imagine if they had gone to Boston Harbor to dump tea in protest only to be thwarted by environmentalists who think tea would pollute the harbor? This is exactly what is happening in Grand Rapids Iowa. A group of citizens want to have a "Tea Party" tax protest. However, State officials will not allow them to dump real tea into the Cedar River. The Cedar Rapids group will only be allowed to dump dechlorinated tap water or river water from buckets labeled “tea.” If this had happened to our founding fathers, I suspect the Revolutionary War may have started a little earlier.

A Cedar Rapids group will do a symbolic tea dumping into the Cedar River on Saturday because state officials won’t let them use the real thing.

An anti-tax group wanted to pitch in real tea like the Bostonian revolutionaries opposed to England’s tea taxes.
Advertisement

Tea, although natural and quite tasty, is considered a pollutant that can’t go into a body of water without a permit, said Mike Wade, a senior environmental specialist at the DNR’s Manchester field office.

Although not as steeped in history, the Cedar Rapids Tea Party will dump dechlorinated tap water or riverwater from buckets labeled “tea,” said Tim Pugh, the group’s founder. (excerpt) read more at desmoinesregister.com