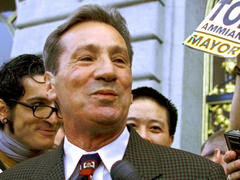 Leave it to a loony Assemblyman from San Fransisco to suggest legalizing marijuana and taxing the sale of it as a way to improve the states budget. Assemblyman Tom Ammiano claims this would raise $1 billion dollars per year with a tax of $50 for every ounce. I wonder how he came up with that number? Perhaps, Assemblyman Ammiano has been doing a little personal research.

He is so serious about this he introduced new legislation on Monday.

Assemblyman Ammiano is a former San Francisco supervisor and used his power in 2006 to make marijuana offenses a low priority for police.

Ammiano is very aware that the State of California is having trouble taxing or saving its way out of its economic mess. He thinks maybe we can smoke our way out of the problem. He wants to slap a tax, legalize and then tax the state's number one cash crop.

He wants to legalize the sale of it, the transportation of it and then tax it $50 for every ounce. No one under 21 would be allowed to purchase it and it would still be illegal to drive under the influence of it.

Ammiano says $1 billion could be raised every year by doing this. It would also save the state money in other ways. (excerpted) read more at abclocal.go.com